The following men were members of the militia in Perry County, Illinois, in 1862, as the Civil War was ramping up. Most of these men went on to serve in the Civil War or were already serving, even though their names were on the militia list. Among the war’s survivors, several moved to Kansas after the war.

Harriet N. Logan, daughter of Carroll Bias Logan and Lucinda “Lucy” Ann Venable Logan, married Josiah Bigham. She and Andrew Jackson Logan were twins. Harriet Logan Bigham died in 1868 and is buried with the Bigham family at Hopewell Cemetery in Perry County, Illinois. Older records have more information about the full tombstone inscription, but this fragment was all Jack Logan and I could find in the cemetery.

Reuben Logan, son of Carroll Bias Logan and Lucinda “Lucy” Venable Logan, was born 17 August 1845 in Perry County, Illinois. After the Civil War in 1870, he married Anna Guthrie Maxwell. Anna’s first husband, Lt. William B. Maxwell, had served in the same company and regiment as Reuben Logan. William Maxwell was killed in the Battle for Atlanta 28 July 1864. He and Anna had been married a little over five months.

Reuben Logan and Joseph Allen both enlisted in Co. D, 48th Illinois Volunteer Infantry. Reuben was 29; Joseph Allen, 30. Reuben Logan made it through the war unscathed; however, Joseph Allen was wounded by a shell 13 December 1864 while engaged in the assault on Fort McAllister at Savannah, Georgia. His left arm was amputated. He was discharged because of disability 23 March 1865. Joseph, Margaret, and their children moved to Cherokee County, Kansas. The History of Cherokee co., Kansas has a detailed biography of Joseph’s Civil War service.

Below is the Muster and Descriptive Roll for Company D, Forty Eighth Infantry, enumerating both Joseph Allen and Reuben Logan. 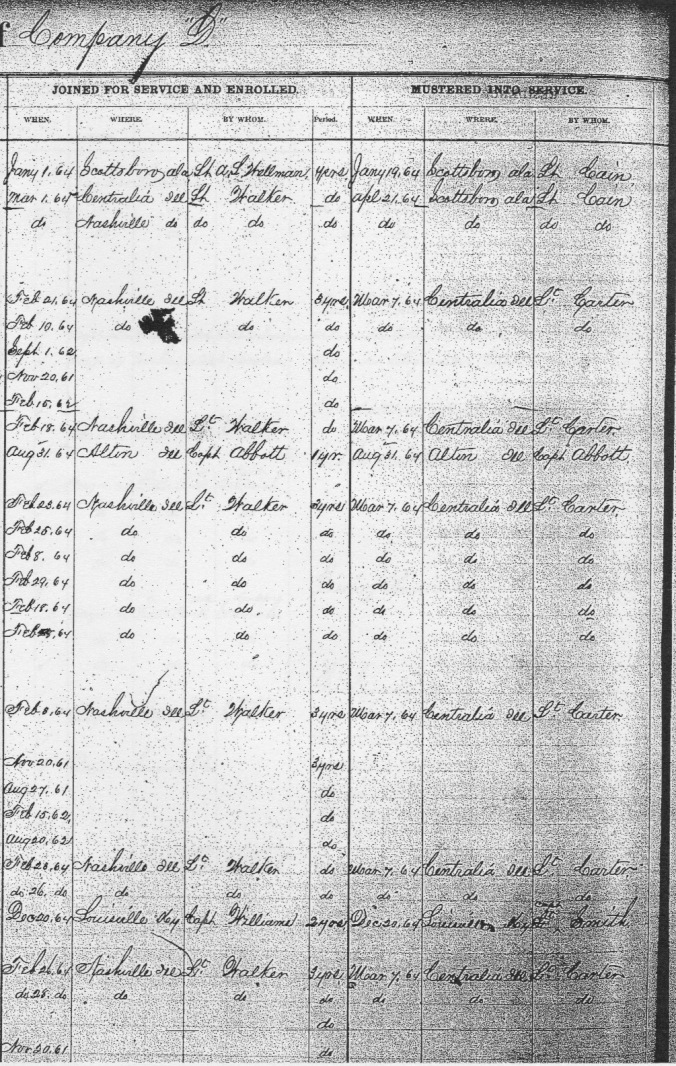 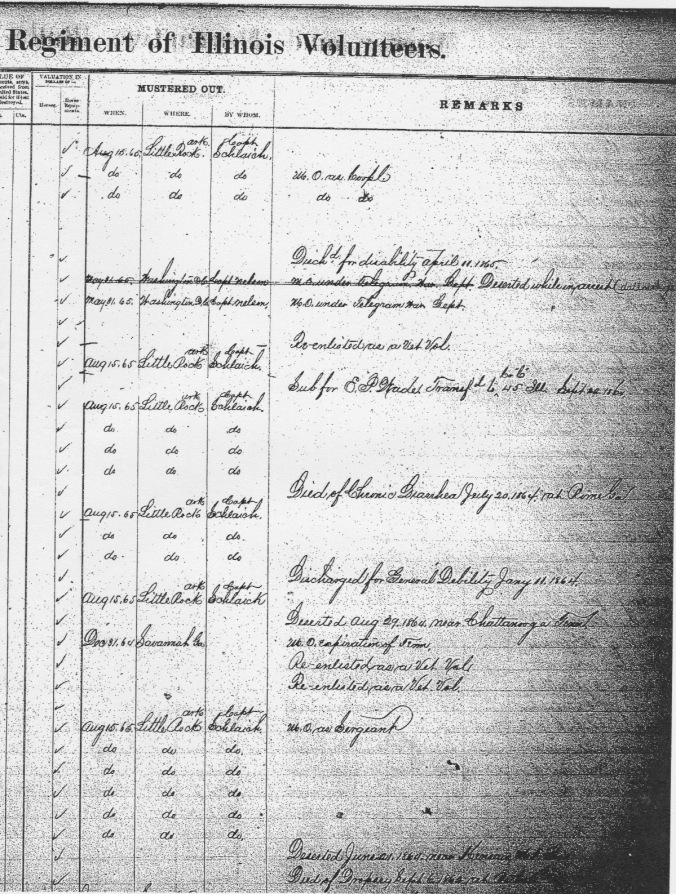 James W. Logan was the son of (Carroll) Bias Logan and Lucinda “Lucy” Ann Venable Logan. He was a Civil War veteran.

Four households from Lucy A. Logan is Joseph Allen. He married Margaret Jane Logan, daughter of William Logan and Matilda Thackston or Thaxton Logan. Joseph Logan served with Co. D, 48th Illinois Infantry, in the Civil War. He was wounded in the left arm by a shell in the Union assault on Fort McAllister, Savannah, Georgia, necessitating amputation of his arm. He was discharged from the Army 23 March 1865 so his wounding and recovery would still have been fresh in body and mind at the time of this state census. 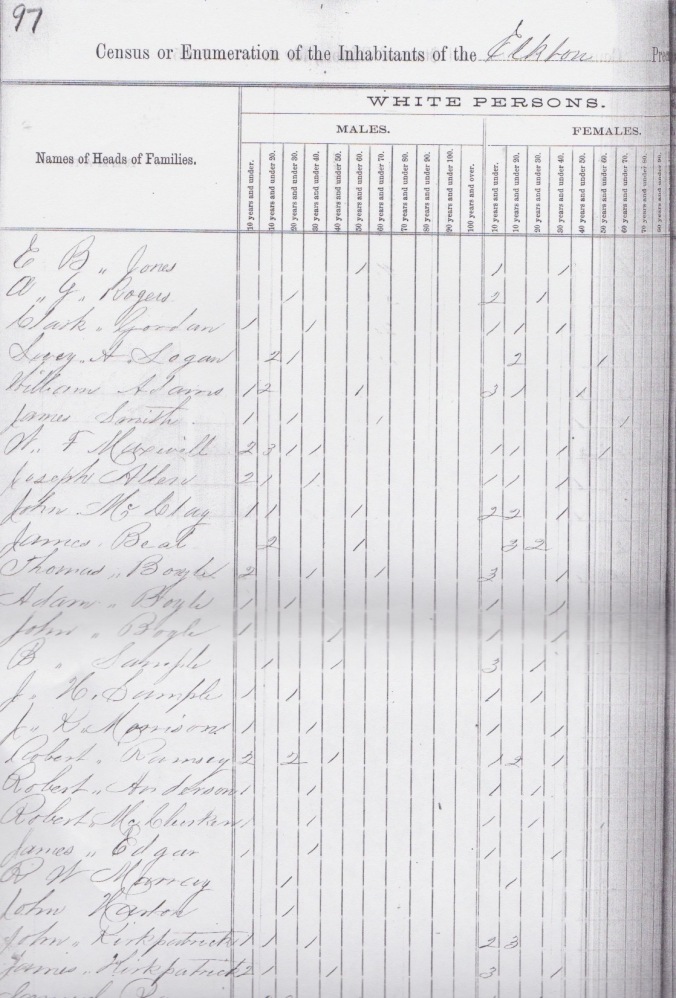 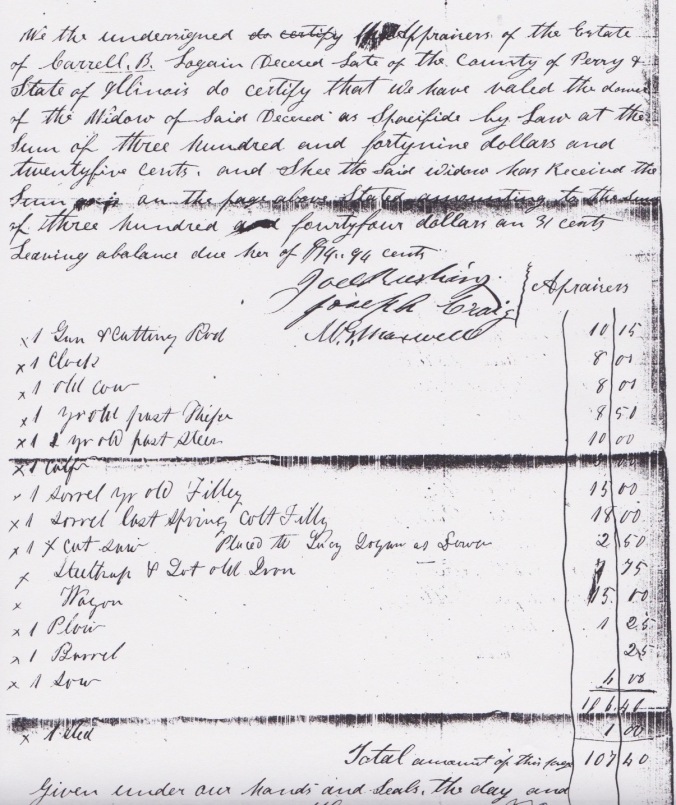 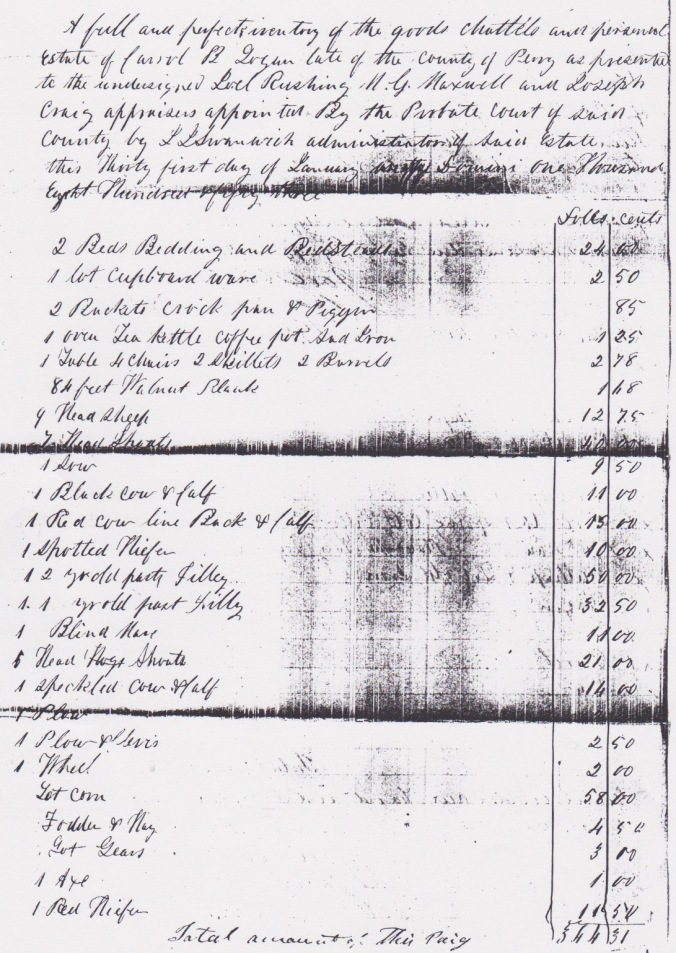 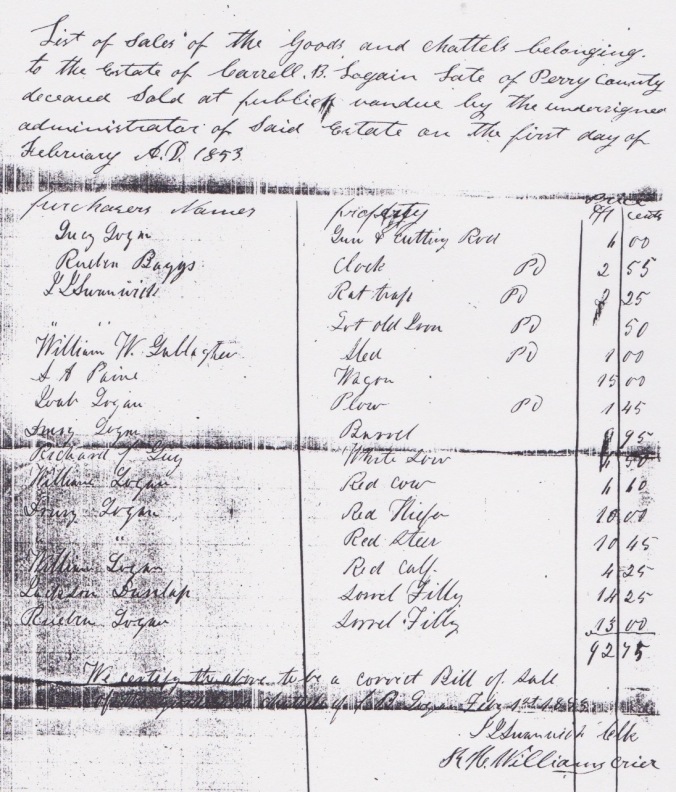 “We shape our buildings: thereafter, they shape us.” Winston Churchill 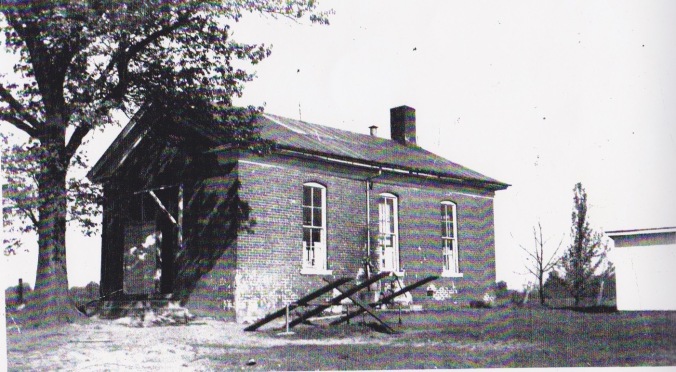 James W. Logan was the son of Carroll Bias Logan and Lucinda “Lucy” Ann Venable Logan. He enlisted 15 August 1861 and served in Co. A, 31st Illinois Volunteer Infantry Regiment, U.S. (Union). James W. Logan was from Pinckneyville, Perry County, Illinois. In camp at Big Black River, Mississippi, three-fourths of the men reenlisted as “Veteran Volunteers.” For reenlisting, the soldiers got a bonus and — perhaps most importantly — a furlough. James W. Logan had another incentive. He had been court martialed. Major General McPherson issued an order which offered a “release from all arrests…and from all charges and specifications which may have been filed….” Because James W. Logan reenlisted, “the sentence of said Court Martial [was] remitted.”